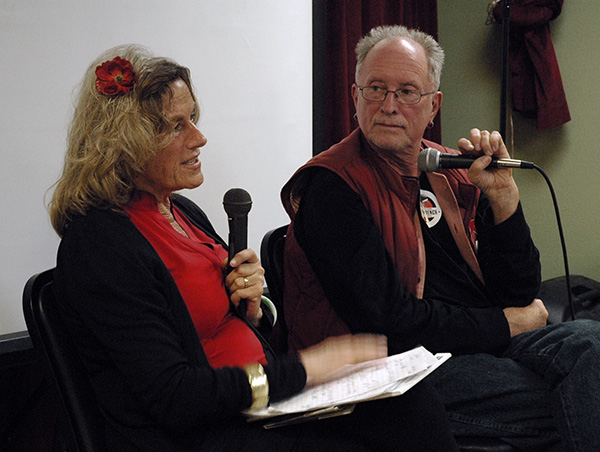 Legendary activists and educators Bill Ayers and Bernardine Dohrn are interviewed by Rag Radio host Thorne Dreyer and writer/activist Alice Embree. They discuss Bill's new book, Demand the Impossible!: A Radical Manifesto, and how it addresses the problems we face at this dramatic juncture in history.  Vijay Prashad calls Bill Ayers "the philosopher of the revolutionary spirit," and Angela Davis writes that Demand the Impossible! "is a book that should be read by everyone who believes that 'another world is possible.'" Bill Ayers is a social justice activist and an elementary education theorist. He is a Distinguished Professor of Education and  Senior University Scholar (retired) at the University of Illinois at Chicago, and author of two memoirs, Fugitive Days and Public Enemy. Bernardine Dohrn, the first law student organizer for the National Lawyers Guild, was a Clinical Associate Professor of Law at the Children and Family Justice Center at Northwestern University School of Law. Ayers and Dohrn, who are married, were active in the Sixties New Left, and the movement against the War in Vietnam -- and were leaders of the Weather Underground. Bill has been on Rag Radio five times. This is our second show with Bill and Bernardine together. Bill and Bernardine came to Austin to speak and lead a discussion at the High Road on Dawson Wednesday, June 21. Bill also signed copies of his book, Demand the Impossible, which were available for purchase at the event, which was sponsored by the New Journalism Project, publisher of The Rag Blog and sponsor of Rag Radio, and by the Austin Chapter of the Democratic Socialists of America (DSA).Bill Ayers and Bernardine Dohrn. Photo by Carlos Lowry. Rag Radio is produced in the studios of KOOP 91.7-FM, an all-volunteer, cooperatively-run, solar-powered community radio station in Austin, Texas, in association with The Rag Blog and the New Journalism Project, a Texas 501(c)(3) nonprofit. The host and producer of Rag Radio, Thorne Dreyer, is a prominent Austin-based activist and writer who was a pioneer of the ’60s underground press movement. The show’s engineer and co-producer is Tracey Schulz and the staff photographer is Roger Baker. The syndicated show is broadcast (and streamed) live Fridays, 2-3 p.m. (Central) on  KOOP, and is later  rebroadcast and streamed on WFTE-FM in Mt. Cobb and Scranton, PA., on Houston Pacifica's KPFT HD-3 90.1, and by KKRN, 88.5-FM  in Round Mountain, CA -- and as a featured podcast at Veterans Today Live.